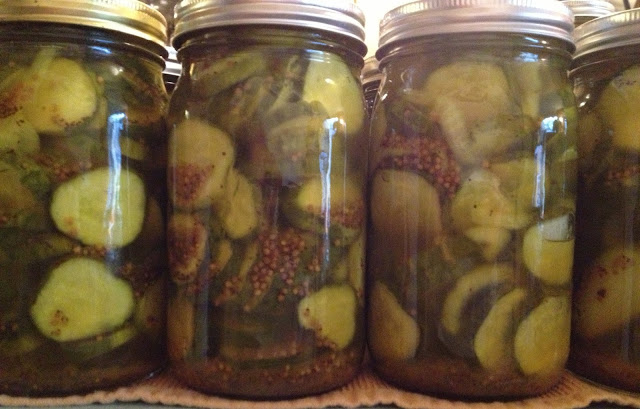 I have always been a lover of pickles…..Sweet, Dill, Sour, Cornichons, Bread and Butter…you name it, I LOVE em!  I even marinate chicken in pickle juice, but that another post (Chic-Fil-A Sandwiches) That being said, I have always been in awe of people who have made homemade pickles, but figured they were too hard to make, so I never tried.

A few years back Craig and I joined a CSA (Community-supported agriculture) farm.  As part of the membership, we were asked to attend a farm event (we usually went to the fall harvest festival and fund raiser for Heifer International), as well as help work at the farm for a day.  We always planned to go more than once, but out schedules never meshed out.  One of the events we attended was pickle making party.  I was so excited to go and help make pickles, I could barely contain myself!  So the day came, and we were in the kitchen, cleaning pickles, heating up vinegar stuffing cucumbers, garlic and dill weed into jars.  Then filled them with vinegar, and capped them.  I was like…..THAT’S IT?  Besides the water processing, we were done.  Believe me, I was a little let down, and mad at myself for not trying to make them earlier.
Well, that was it I decided then and there, I would make pickles ASAP!  That was about 10 years ago, and I have made pickles (with a few exceptions) every year since.  The first year I made Dill as well as Bread and Butter pickles, and have had MANY requests for the Bread and Butter Pickles, so now that’s all I make.  Although, I do have a neighbor that has been known for making Gin Pickles, and have been interesting in trying to make those……
Here’s my recipe for Bread and Butter Pickles, if you not on my Christmas list to receive a jar!
BREAD AND BUTTER PICKLES

Process in a boiling water bath canner for no more than 10 minutes.
To avoid a cloudy brine or darkened pickles, do not use common table salt (use only canning salt).

I used 50 pounds of pickles and made a 16 time recipe of the brine, and still ran out.
Share
Prev Post

Picnic at the beach