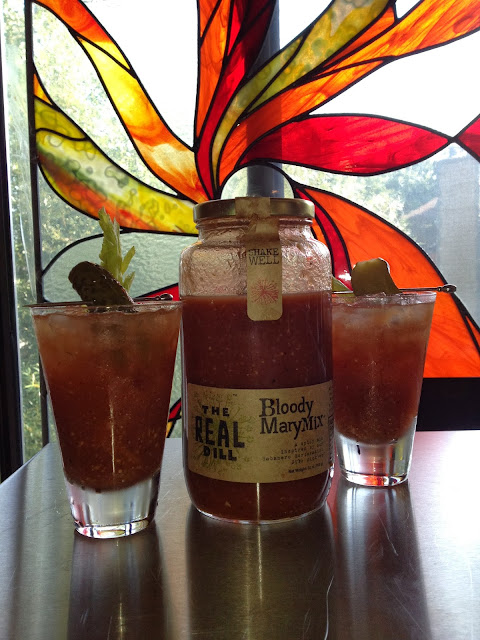 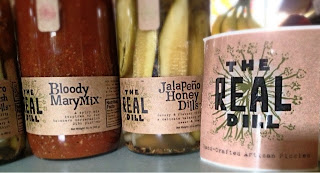 A couple of months back I was fortunate to be able to review The Real Dill’s Pickles.  In the package there was a jar of Bloody Mary mix.  Immediately, my partner Craig asked if he could write a guest blog to be featured here. So after much research and testing, here is his post:
~Bob
“The Real Dill” Bloody Mary:
The history and origin of Bloody Mary’s vary, I like to believe it was named after Queen Mary I of England.
Queen Mary I of England was born February 18, 1516, the daughter of King Henry VIII and his first of six wives, Catherine of Aragon. Mary was the only child from that union to survive infancy. She reigned as Queen of England from July 19, 1553 until her death on November 17, 1558.
Mary had always rejected and resented the break with Rome that her father had instituted and his subsequent establishment of the Anglican Church that had flowed from her half-brother’s Protestantism, and now she tried to turn England back to Roman Catholicism. This effort was carried out by force, and hundreds of Protestant leaders were executed. The first was John Rogers (a.k.a. “Thomas Matthews”), the printer of the “Matthews-Tyndale Bible”. His execution was followed by the execution of former Archbishop of Canterbury, Thomas Cranmer, who was primarily responsible for the printing of the “Great Bible”. Hundreds more would follow in Mary’s bloody reign of terror.
This earned the queen the title of “Bloody Mary”.  Now that the history lesson is over, let’s get on to drinking!

Bloody Mary’s are a popular drink to go with brunch.  Recently Bob recently had the opportunity to review a line of artisan pickles from “THE REALDILL”, they also sent a jar of their Bloody Mary mix.  It is made from the brine of their Habanero Horseradish Dills, which are so de-lish!    I have tested the mix a couple of times now, well three times if you count the one that is quenching my thirst.

As with most cocktails they vary from bartender to bartender,  the Bloody Mary is pretty simple to make…the most common recipe is: 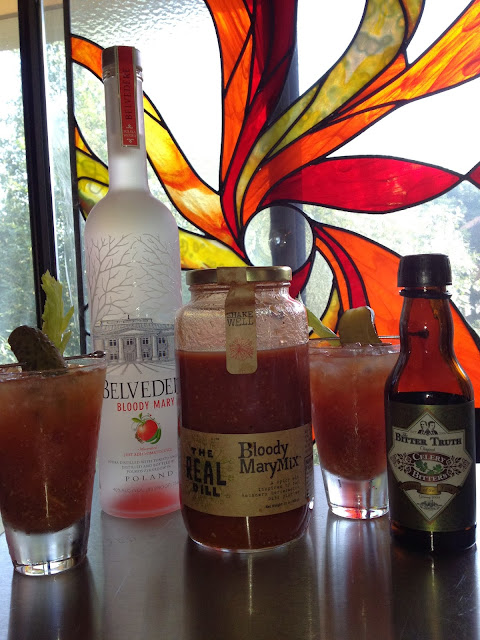 6 parts Tomato juice
1 part lemon juice
dash of salt & pepper
dash of Worcestershire sauce
dash of Tabasco
For this test I used the following:
Tall glass filled with ice
2 dashes of celery bitters from “The Bitter Truth”
3 oz of “Belvedere” Bloody Mary Vodka from
6 oz of “The Real Dill” Bloody Mary Mix
a squeeze of lemon juice
a stalk of celery
and a spear of Habanero Horseradish Dill pickle
Whereas I like spice and heat, Bob not so much, but this mix has the perfect combination of spice and heat.  It gives you the since of a very spicy drink but it leave you with just enough of the heat not to have to call the fire department out or eat a spoonful of sour cream.  I would have to say that this has to be my favorite Bloody Mary mix that I have tried.
Here are a few different takes on this very “Noble” cocktail:
Bloody Beer: Beer, usually a light beer or lager, replacing vodka. Often served with Worcestershire sauce, black pepper, hot sauce, and/or lime.
Bloody Bishop: Sherry in equal measure to vodka.
Bloody Cab: Cabernet Sauvignon replacing/in addition to the vodka.
Bloody Derby: Bourbon replacing vodka.
Bloody Fairy, Red Fairy : Absinthe replacing the vodka.
Bloody Geisha, Bloody Ninja: Sake replacing vodka.
Bloody Hillbilly: Moonshine replacing Vodka
Bloody Maria: Tequila replacing vodka.
Bloody Maureen: Guinness replacing vodka.
Bloody Molly: Irish whiskey replacing vodka.
Bloody Murder: Gin replacing vodka, black vinegar replacing Worcestershire sauce, wasabi sauce replacing horseradish, served with a cherry tomato pierced with a plastic sword stirrer
Bloody Pirate, Cubanito: Dark rum replacing vodka. The latter is commonly found on menus in Havana, Cuba.
Bloody Scotsman: Scotch replacing vodka.
Michelada Clementina (or simply “Chelada”) : Mexican beer replacing vodka, usually flavored with a couple of dashes of Worcestershire sauce and Maggi and Tabasco sauce. Usually made with Clamato (tomato juice with clam juice added). Usually the proportion of beer equals the tomato juice.
Red Hammer: Through the 1950s in the Northeastern U.S., while vodka was scarce, gin instead of vodka was known as a Bloody Mary; once vodka became readily available in those regions, the traditional vodka-based Bloody Mary was known as a Red Hammer for a time.
Virgin Mary, Bloody Shame, Bloody Virgin, or Bloody Barbara : Without alcohol. Typically with an increased volume of tomato juice, the vodka simply being omitted with no substitute.
“Virgin Mary” is commonly used in the USA, and
“Bloody Shame” is commonly used in Australia.
“Bloody Barbara” refers to Barbara Castle, the British Minister of Transport who introduced tougher drink-driving laws.
Share
Prev Post